There is an abundance of ways to tour Gettysburg National Military Park. Each place takes visitors to unique vantage points and provides different perspectives of the three-day battle throughout the 6,000-acre park.

But often it’s the pace that can make the biggest difference, and that’s no more noticeable than by tackling the hallowed grounds by foot. While there are trails at Gettysburg National Military Park that some would consider a good hike, much of the battlefield’s pedestrians pathways are more in line with walking than hiking.

Touring the battlefield by foot not only gives travelers an up-close look at where history happened, the monuments, farms and cannon, but nature as well. The park is a great place to spot wildlife of all sorts including birds, foxes, reptiles, amphibians and insects.

While it’s not uncommon to see buses, bicycles and automobiles all leaving the Gettysburg National Military Park Museum & Visitor Center for tours of the battlefield, it’s also a great place to grab your backpack*, fill up a water bottle and check out the park on your own two legs. 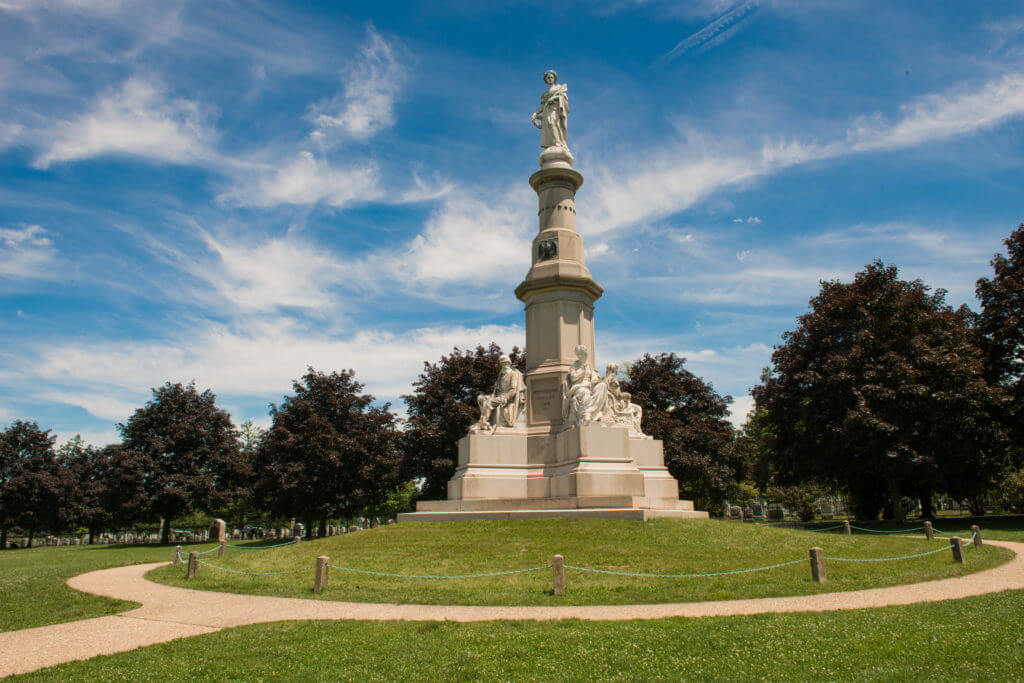 Directly across from the Visitor Center, pedestrians can head out and explore Cemetery Ridge, home of the Union Army’s encampment and battle lines during the second and third day of fighting in July 1863. One paved path leads north and takes visitors directly to the headquarters of Union Gen. George Meade, the Highwater Mark of the Confederacy as well as Soldiers’ National Cemetery, which has a great walking loop of its own, past the Lincoln Speech Memorial, Soldiers’ National Monument and other Union memorials and graves. 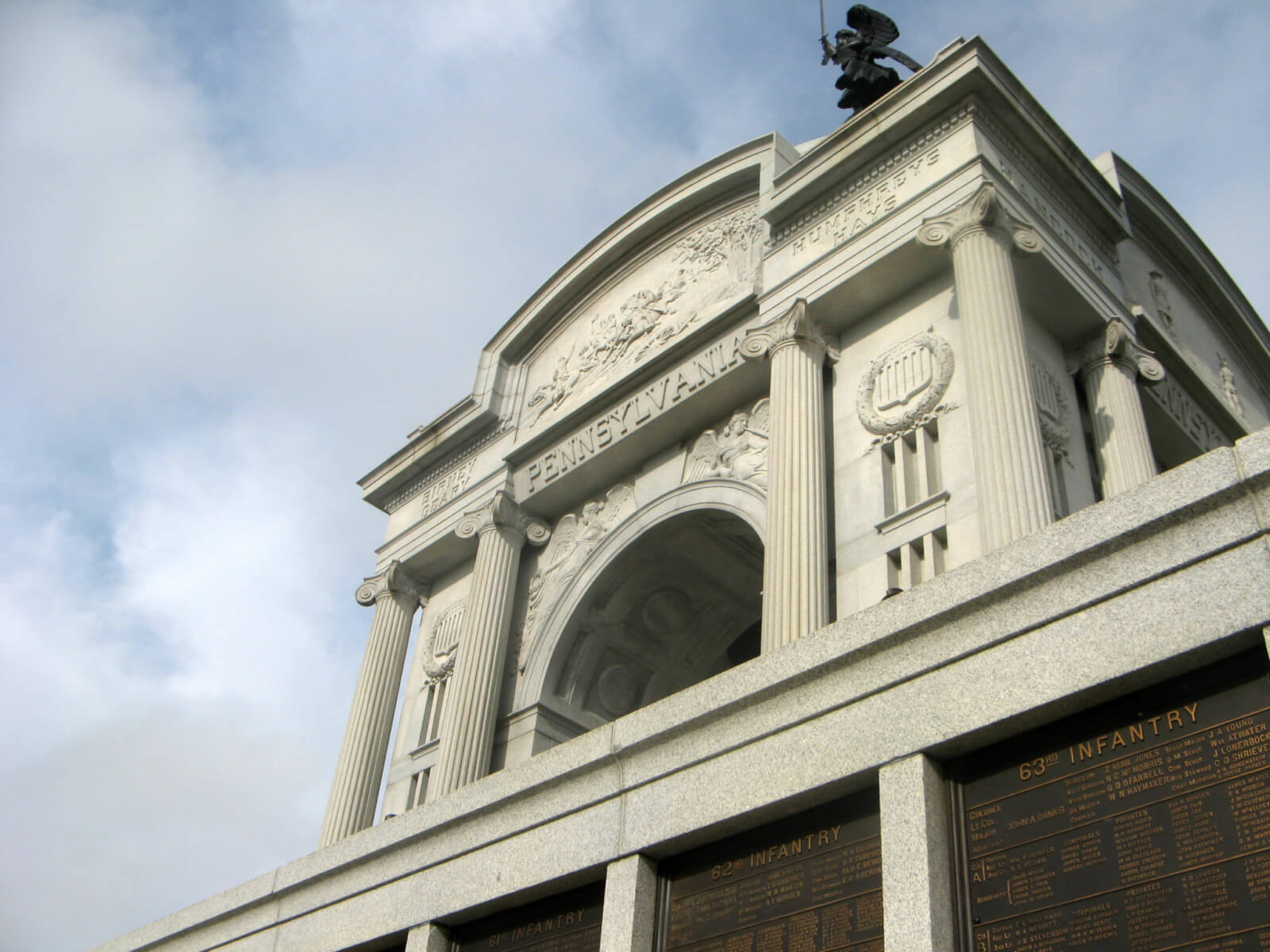 Another path ventures south and brings pedestrians to the middle of the Union stronghold with such stops as the Pennsylvania Memorial and Little Round Top, all using paved walkways and park roads. Along the way, you’ll pass by the Father Corby Monument, Weikert Farmhouse and the line of Union cannon marking the spot of the fierce fighting on July 3, 1863. 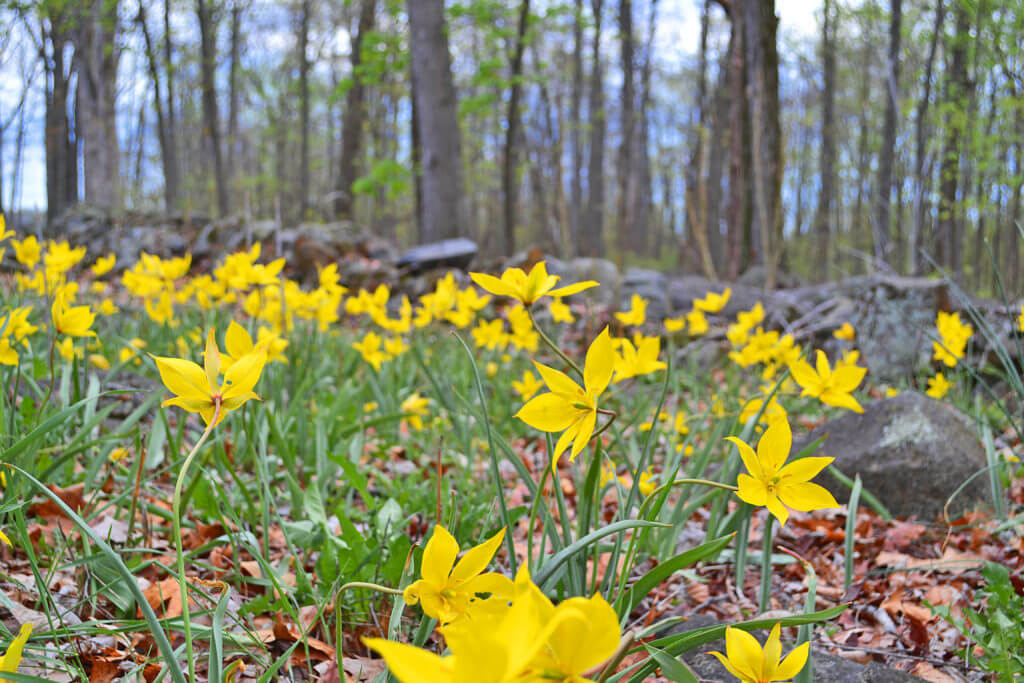 The Big Round Top trail is probably the most established on our list, and visitors often feel like they’ve been treated to something special when they’ve reached the summit, the highest point on the Gettysburg battlefield. The walk is short, but is a bit of a climb. At the top, there are five monuments, including one to the famous 20th Maine. 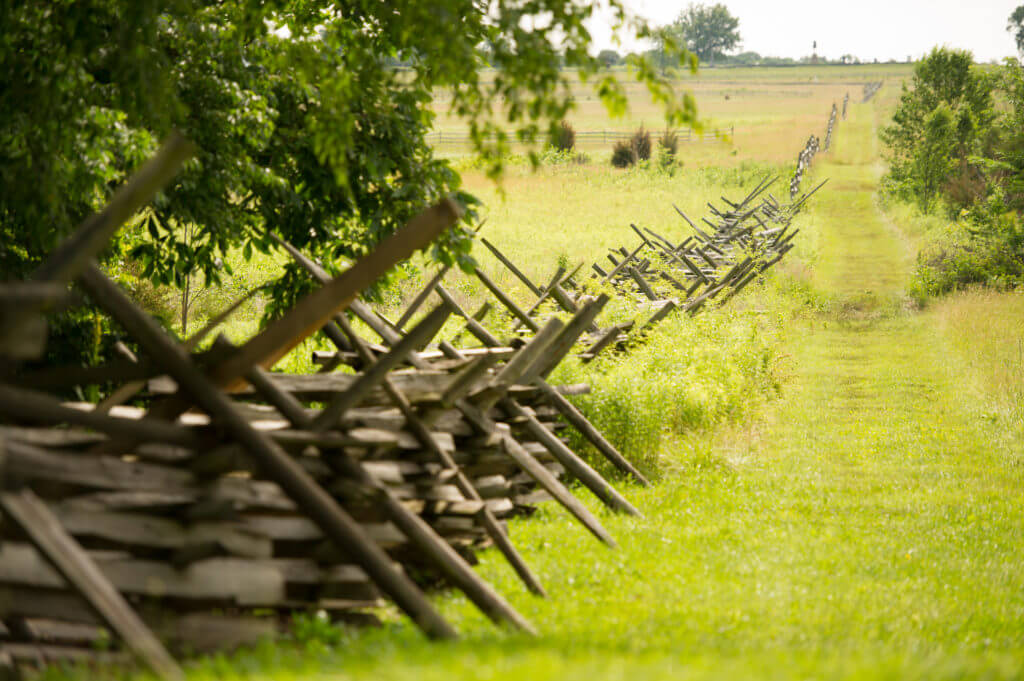 Cemetery Ridge was in the throes of battle on July 3, 1863, as Pickett’s Charge unfolded from the onslaught of Confederate soldiers marching nearly a mile from a westward ridgeline home to the southern army. Visitors can walk (or march) that same mile today by using a grass-mowed pathway from the Highwater Mark to the feet of Gen. Robert E. Lee and the Virginia Memorial on Seminary Ridge. There’s no better way to get a feel for that fateful day than to walk that mile, but you’ll need to imagine the extra 30-40 pounds on your back and the barrage of enemy fire. 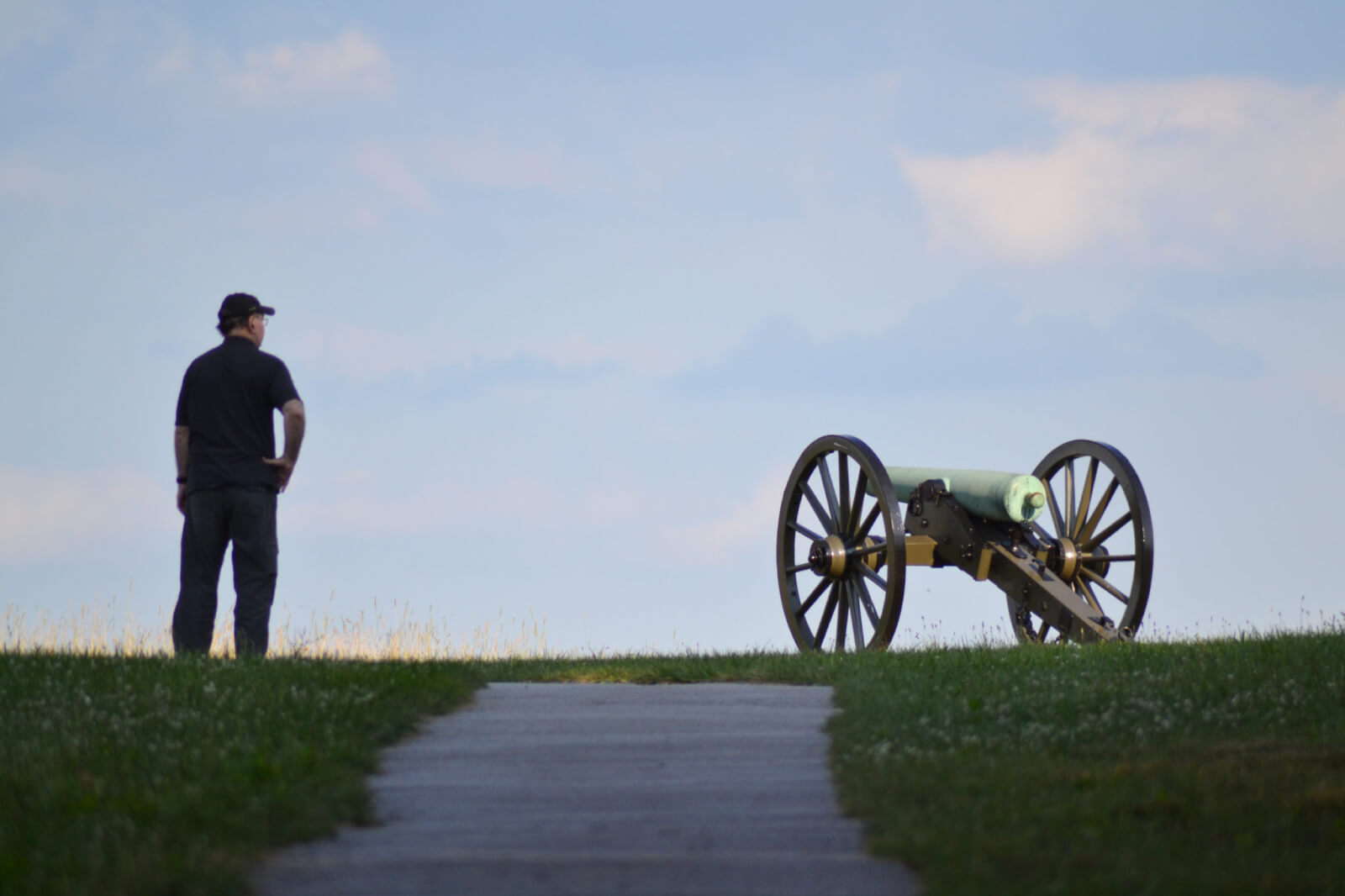 Seminary Ridge, itself, provides a great, often shaded backdrop, for walking the battlefield. Along Confederate Avenue, walkers will get some great views of some of the battlefield’s most beautifully sculpted monuments, as well as a glimpse of the Spangler farmhouse and perhaps a horseback tour or two passing by. The monuments are more sparse along Confederate Avenue, but the walk is nice and there are plenty of places to take a rest under a shade tree. 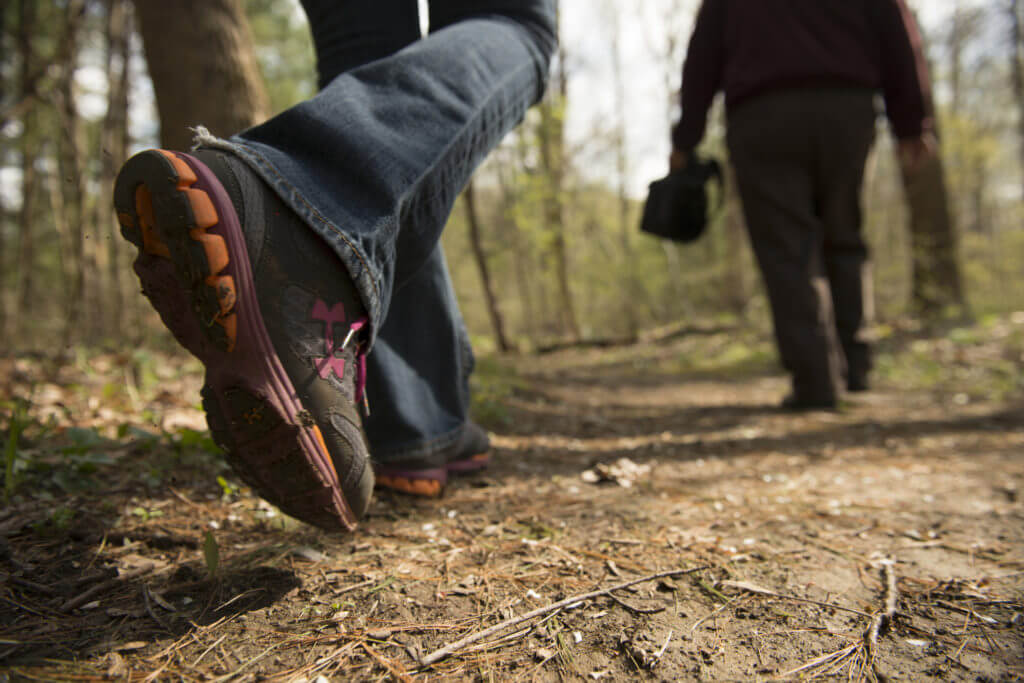 East Cavalry Field, removed by a few miles from the rest of Gettysburg National Military Park, is vast and sometimes sparse, but several of the monuments to this battle are tucked into wooded areas that can only be appreciated on foot. By car, East Cavalry Field is a vast farm with a few monuments rising up from the fields, but a walk through this often-forgotten-about battlefield will give you a whole new perspective. 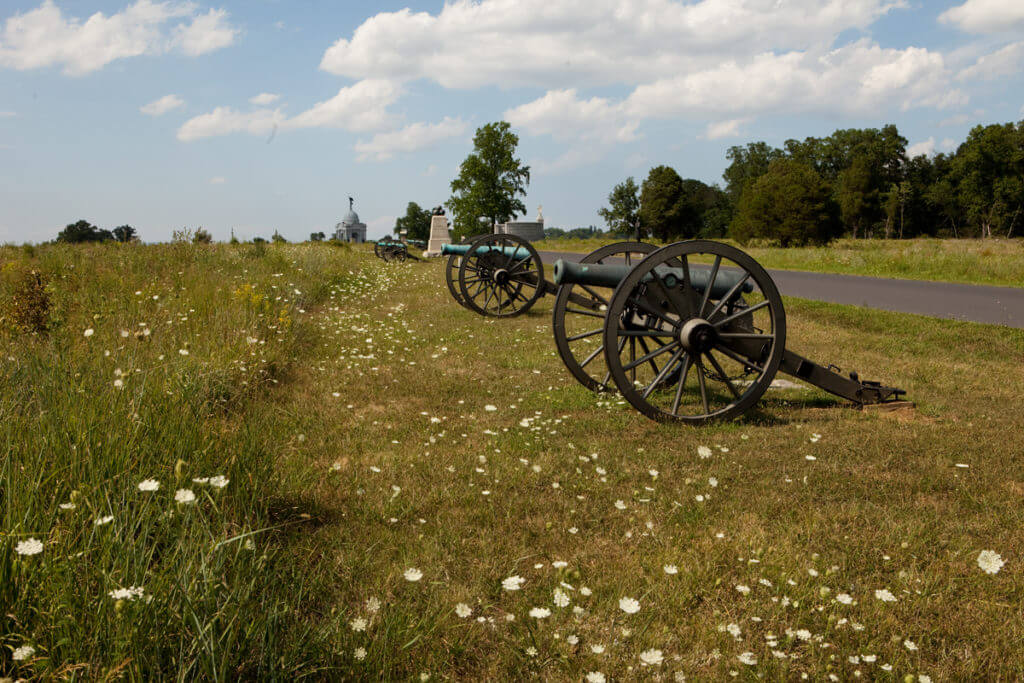 If you’re looking for a few more adventurous hikes, do what the Boy Scouts do, take the Johnny Reb or Billy Yank trails. These 4.2 and 10.3-mile hikes, respectively, offer a comprehensive look at Gettysburg’s history. Stop by the Visitor Center first for a guidebook on both trails and follow the instructions, step-by-step, for a glimpse of monuments, army headquarters, farms and other points of interest.

Regardless of when you decide to lace up your boots and take a hike or a long walk at Gettysburg National Military Park, be sure to apply insect repellant, stay hydrated and wear comfortable shoes and clothing. With an abundance of monuments and other points of interest, it won’t be long before you’ve gone farther than you’ve planned.

Gettysburg National Military Park continues to add trails and walking paths to the park, with plans in the future to link more Civil War-era farms with key sections of the Gettysburg battlefield. In recent years, paths connecting the visitor center with Cemetery Ridge, a pedestrian walkway up the backside of Little Round Top, and a sidewalk linking Soldiers’ National Cemetery with the town of Gettysburg, have all helped visitors navigate these hallowed grounds on foot. The National Park Service offers some great tips to help you safely plan your visit.