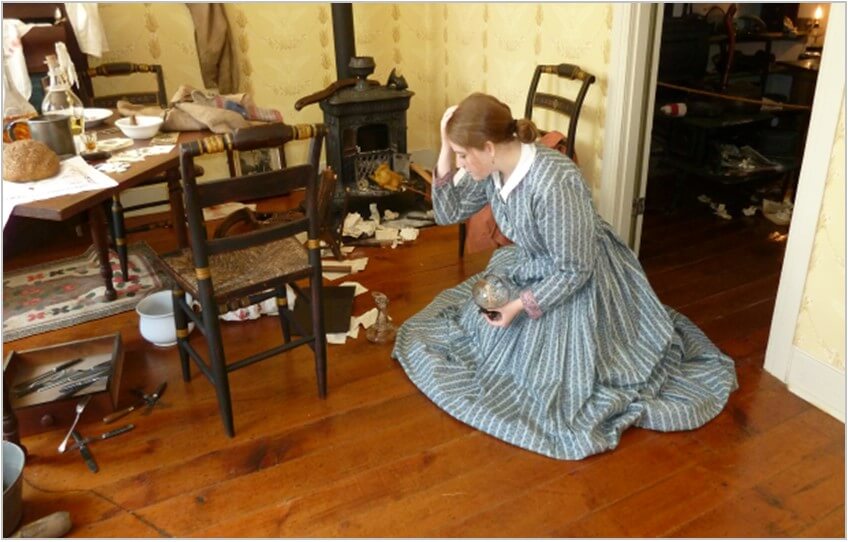 The Shriver House Museum presents the Battle of Gettysburg from a very different perspective – through the eyes of one family who was caught up in one of the deadliest battles ever to take place on American soil. Families all over town watched the conflict unfold from their cellar windows; the home of George and Hettie Shriver, however, was commandeered by Confederate sharpshooters where at least two Confederate snipers were shot and killed. Their blood evidence still lingers to this day. Learn what occurred during those three days of horror that terrified the citizens of Gettysburg and how the Shrivers’ lives were affected before, during, and after the fighting.

The Battle of Gettysburg was a terrifying experience for the residents of this historic town. But the end of the battle was truly the beginning of the nightmare for people who had never been exposed to the incredible horrors of war. More than 165,000 Union and Confederate soldiers converged on the town in July 1863. Approximately 70,000 of those soldiers were Confederates which, no doubt, was frightening for the citizens of this Union town who were not aware of Gen. Lee’s orders which forbade the seizure or injury of private property by his men. The majority of Lee’s men followed his orders; but there were some who did not. One resident stated the Confederates “went from the garret to the cellar, and loading up the plunder in a large four-horse wagon, drove it off.” Step back in time to understand what the battle was like for one family who called Gettysburg ‘home’ in 1863.

The Shrivers’ were one of the wealthiest families in town at the time. Living historians bring their story to life as you stand just feet from the area where Confederate sharpshooters fired muskets on their Union adversaries. See beautifully furnished rooms ransacked by the invading forces; watch as doctors and nurses tend to wounded soldiers in a make-shift hospital; view the garden filled with heirloom vegetables that grew in south-central Pennsylvania in the 1860s.

Space is limited; reservations are recommended.