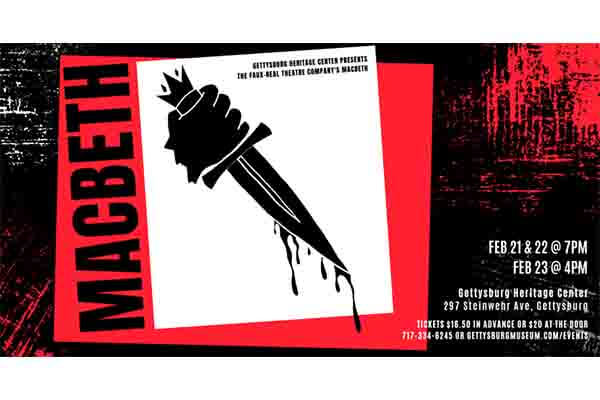 Gettysburg Heritage Center presents The Faux-Real Theatre Company’s Macbeth, directed by Constance Tarbox with Mark Greenfield. Performances will take place at Gettysburg Heritage Center on February 21 and 22 at 7pm and February 23 at 4pm. Tickets are $16.50 in advance and $20 at the door and can be purchased by phone at 717-334-6245 or online at www.GettysburgMuseum.com/events.

Shakespeare’s blood-thirsty tale of ruthless ambition follows the rise and fall of Macbeth, a Scottish nobleman driven by fate, witchcraft, secret desires and his wife’s dark influence. This production defies time and space, setting the action in a modern Scotland recovering from the devastation of the American Civil War. Actors are staged above and around the Civil War wax figures at the Gettysburg Heritage Center’s battle theatre, viscerally reminding the audience of the ever-present threat of violence throughout the play and the scars that civil wars leave upon a country.

Intrigued by the Shakespeare’s practice of giving actors scrolls with their lines and cues to memorize in preparation for a week’s rehearsal before opening night, this production marks Faux-Real’s first experiment with the Elizabethan rehearsal practice. Seasoned company members will arrive in Gettysburg February 17th with their roles memorized and director Tarbox will have five days to shape the performance for their opening night on February 21st. Audience members will feel the adrenaline of discovery as the professional actors experiment with the production before their very eyes.

Called “magical” and “tireless” by The New York Times, expect company members to bring Shakespeare to life as never before, with actors described by Backstage as “almost frighteningly possessed by real and impressive powers of concentration” creating another performance that Newsday has previously described as “a fourth-wall-busting hybrid of dramatic convention and rock sensibilities.”

Offering a unique look at both the Battle of Gettysburg, and the town of Gettysburg, the Gettysburg Heritage Center has solidified itself as a prominent destination within the community. The non-profit facility contains a comprehensive museum experience, giving visitors a visual and interactive orientation to Gettysburg. The story of Gettysburg unfolds for guest through various displays, 3-D programming and historic artifacts. Much of the success of the museum is due to various private and public partnerships, including the American Battlefield Trust, and the collaborative efforts with Adams County Historical Society and Land Conservancy of Adams County. Learn more at gettysburgmuseum.com.