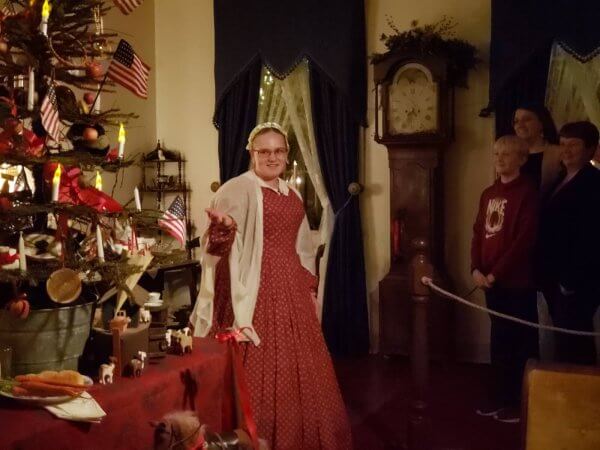 The perfect way to end the holiday season.

The Shriver family moved into their beautiful new home – one of the finest in Gettysburg at the time – just before the Christmas of 1860. In anticipation of showing off their new home to family and friends, the house is fully decorated for a mid-19th century Christmas gathering.

Come hear how very different each of the five Christmases the Shrivers’ spent in their home were affected by the Civil War. One of the wealthiest families in Gettysburg at the time, the first holiday George and Hettie, along with their two daughters, Sadie (5) and Mollie (3), was one full of joy and delight. Just four months later, the Civil War began. The country was in turmoil and by next Christmas George was fighting with Cole’s Cavalry. While he was gone, Hettie was presented with quite a challenge. How to make the holidays festive for Sadie and Mollie while their father was away.

The 4’ tall candle-laden Christmas tree sits in the middle of the handsome parlor decorated with holiday greenery. After hanging their stockings on the mantle, Sadie and Mollie set out springerle cookies in anticipation of a visit from Santa Claus on that magical night. The smell of pine and popcorn fills the house bringing memories of Christmases past.