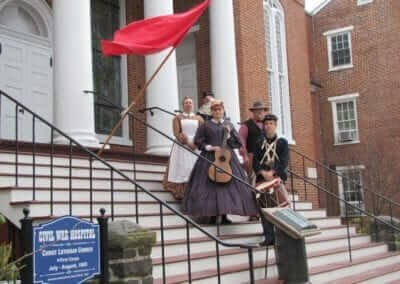 Songs and Stories from a Civil War Hospital

Songs and Stories of a Civil War Hospital brings to life the true stories of wounded soldiers and the doctors and nurses who worked valiantly to save lives — both Union and Confederate — during the Battle of Gettysburg and the following weeks. The experiences of the wounded and their caregivers are presented through poignant readings from soldiers’ journals and the diary of a citizen-nurse who served in this church hospital, through live Civil War era music, especially the Civil War songs of Stephen Foster, and through the poetry of Walt Whitman who served as a Civil War nurse for three years. Songs and Stories also includes passages from President Lincoln’s Second Inaugural Address.

The program includes a variety of vocal and instrumental music from the Civil War era, as well as sing-alongs in which the audience is invited to participate.  Each, visitor will be given the name of a wounded soldier who was actually treated at Christ Church. At the end of the program, the soldier’s fate will be revealed…did he live or did he die? To conclude each performance the audience is invited to rise and join in singing a patriotic song.

Songs and Stories presents a brief history of Christ Lutheran Church, the oldest building in Gettysburg in continuous use for worship. Immediately on the first day of the Battle, this church was converted into a hospital, and continued to care for the wounded and dying for five weeks.

Christ Church cordially invites the public to Songs and Stories of a Civil War Hospital. Period costume is encouraged, and light refreshments will be served. The church is air conditioned and accessible to all.