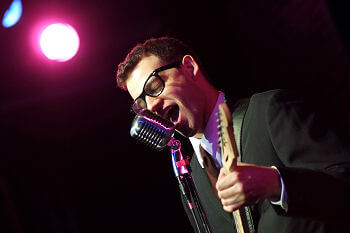 That’ll Be The Day/Buddy Holly

A fresh take on the catalog of Buddy Holly & The Crickets, THAT’LL BE THE DAY features all the bands hits as well as some lesser known gems. Buddy is a true music pioneer and is considered by many to be the Father of Rock & Roll.

The Crickets were one of the first bands of their kind to begin writing their own hits. Todd Meredith and The Rave-Ons will take you on a musical journey starting with Buddy’s early recordings at Decca Records in Nashville, through his breakout hits with Norvajack Studios in Clovis, NM, and ending with the story of his ill-fated final tour.