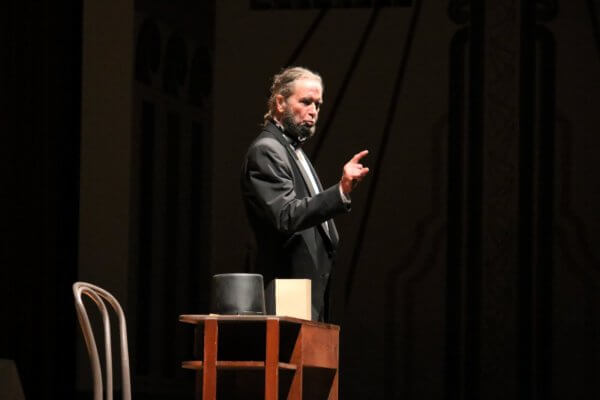 The Night Before Gettysburg

Playwright Chuck Johnson of Perham, Minnesota, brings President Abraham Lincoln’s thoughts to life with “The Night Before Gettysburg,” a short, three-act play, that provides the audience with a peek into the 16th president’s state of mind as he put the finishing touches on his immortal “Gettysburg Address.”

Two performances of the play take place each day, June 30, July 1, July 2 and July 3. Show times are 3 p.m. and 7 p.m., commemorating the 159th Anniversary of the Battle of Gettysburg.

Performances are staged at the Gettysburg Presbyterian Church, appropriately chosen due to its connection to Lincoln who attended a rally there following his address recitation.  A period pew rests inside the sanctuary in the approximate location where Lincoln sat.

Contrary to his own words, Lincoln’s “Gettysburg Address” is long remembered nearly 160 years after he delivered that famous speech in the war-torn town of Gettysburg in 1863. The night before, on November 18, 1863, Lincoln painstakingly poured over his draft on the second floor of the David Wills House, right on Gettysburg’s town square.

These free public performances are offered by Destination Gettysburg.