Every year is great in Gettysburg, but 2023 is shaping up to be one of the best yet with new events, new attractions and some scrumptious new restaurants. And not to forget, it’s the 160th anniversary of both the Battle of Gettysburg and Lincoln’s “Gettysburg Address” – more great reasons to make plans for your next Gettysburg getaway in 2023.

And later in the year, as we mark 16 decades since Abe’s famous speech, the destination will be swarming with excitement for Dedication Day and Remembrance Day the weekend of November 18-19.

Perhaps the biggest headline of the coming year is the opening of Gettysburg’s newest museum, “Beyond the Battle,” a project by the Adams County Historical Society to highlight the history of the local citizens of Gettysburg – before, during and after the Battle of Gettysburg in 1863.

The museum will feature a variety of galleries to highlight everything from the pre-historic days of dinosaurs to an immersive exhibit to share with museumgoers what it was like to experience the largest battle of the continent at your doorstep, to more modern exhibits and displays about tourism, presidential visits and the region’s rich agriculture history.

The “Beyond the Battle” museum is scheduled to open on April 15, and is expected to be a big draw for visitors looking to learn more about the town itself, and the people who have made Gettysburg and its surrounding countryside what it is today. The museum is a great addition to attractions like the Shriver House Museum, Jennie Wade House, the variety of town and nighttime candlelight walking tours and other experiences that share with visitors the tragic and heroic stories of Gettysburg’s civilians.

Once open, the “Beyond the Battle” museum will be the latest addition to Gettysburg’s wide collection of history attractions, including the “World War II: American Experience” museum, which celebrated its grand opening in late 2022, and is already capturing attention among visitors from around the country. This museum – ironically established in America’s most famous Civil War town – features a unique collection of World War II vehicles and memorabilia. Veterans and history buffs alike are in awe of the rare assortment of artifacts.

This year, it’s lights, camera, action as Gettysburg goes back to the big screen with Ken Burns’ film festival in February, and the 30th anniversary of the epic movie, “Gettysburg” in October. But as cool, is the filming of a new movie in this charming and historic town, “A Gettysburg Christmas,” set to film in January. Several landmarks throughout the Gettysburg region will be featured in the movie, and its release is expected in time for the 2023 holiday season.

This Spring will bring to Gettysburg a new food hall, Savorhood Gettysburg, featuring delicious food, beverages and treats from a variety of restaurants and eateries throughout the region; the Gettysburg Mercantile Museum on Baltimore Street; a new headquarters for the Gettysburg Tour Center, and The Barn Resort – a restaurant inside the former Boyd’s Bear barn off Emmitsburg Road, south of Gettysburg.

You can learn about all these great events, new attractions and more by visiting DestinationGettysburg.com. 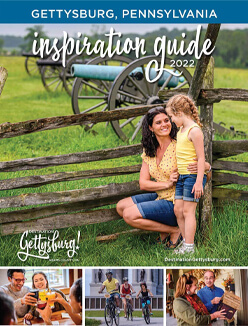 Get the Gettysburg, PA Inspiration Guide