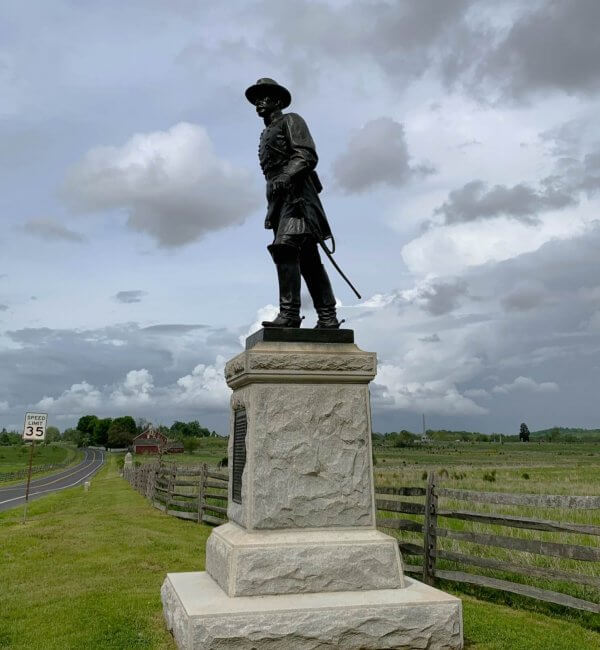 The Association of Licensed Battlefield Guides presents the first in a series of summer evening battle walks with LBG Mike Rupert and “General Humphreys’ Division at Gettysburg”.

This walk explores the ground fought for and held by about 3,700 soldiers on the afternoon on July 2nd, essentially between the Peach Orchard and the Codori Farm on the Emmitsburg Road. General Humphreys, a career US Army officer, leads his division with intellect and fearlessness throughout the battle. “General Humphreys in the midst of this hail storm moved among the troops, and himself looked to the fire of the batteries, stepping between the guns and giving his directions, wholly intent upon the work & heedless of the murderous missiles that were felling the very gunners around him.” As the Confederate attacks moved up the Emmitsburg Road, Humphreys’ men would be nearly enveloped by three Confederate brigades and ordered to withdraw to Cemetery Ridge, all at about the same time. This would be a fighting withdraw as Humphreys describes, “the fire we went through was hotter in artillery and as destructive as at Fredericksburg. . . twenty times did I bring my men to a halt and face about to fire.” As the division remnants made it back to Cemetery Ridge, General Winfield Hancock would observe them, as it “seemed nothing left of the division but a mass of regimental colors still waving defiantly.”

The total walk will be about one-and-a half miles long, mostly using the paved park roads with some walking in the mowed areas on the safe side of the fencing on the Emmitsburg Road.

Meeting Place:  United States Avenue at the 105th Pennsylvania Infantry monument.
Register in advance on our website and check out the rest of the upcoming walks!
https://gettysburgtourguides.org/product/tuesday-evening-walk-june-7-2022/