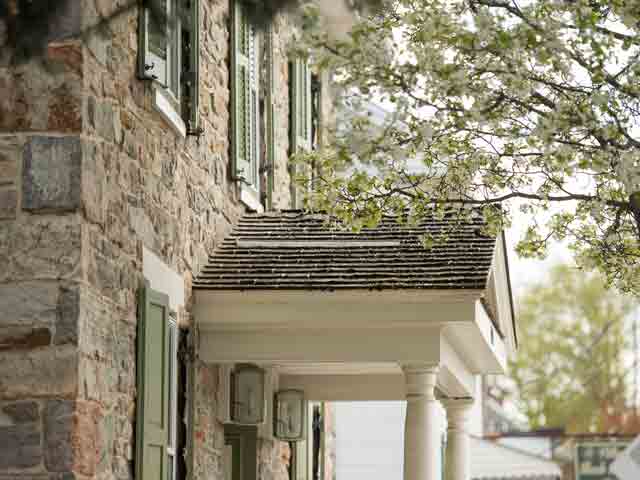 In 1736, the Penn Family authorized European settlers to inhabit the land that would become Adams County. Prior to that, Native Americans occupied the region for thousands of years, but had left the area prior to contact with Europeans.

During the French and Indian War, Adams County settlers were caught in the firestorm and several raids occurred. On April 5, 1758, Shawnee and Frenchmen plundered Thomas and Jane Jameson’s homestead at dawn; several persons were captured and taken west. The Jameson’s had several children, including two sons who escaped capture, one child, named Mary, who was about 16 years old at the time of her capture. Her parents were murdered during the march west, but Mary was spared and later adopted by two Seneca women. She later married two chiefs and had several children. Several opportunities arose where Mary could have been liberated and returned to the White world, but she refused to return and spent a long life in the Native American culture with her family. Mary inherited a large tract of land in New York. Her life story was published in the 1820’s. Mary was in her 90’s when she passed away in 1833. A life-size monument memorializes Mary at St. Ignatius Loyola Catholic Church and a Pennsylvania historical marker is at the intersection of Routes 30 and 234.

On April 13, 1758, the Bard family had a similar experience. Their home in Carroll’s Delight, near modern day Virginia Mills, was raided and their six-month-old child murdered. For over two year, Native Americans held Catherine Bard captive, but her husband escaped, trailed them and bargained for her release. Raids in Adams County occurred only during the French and Indian War and the countryside once again returned to a place of peace. 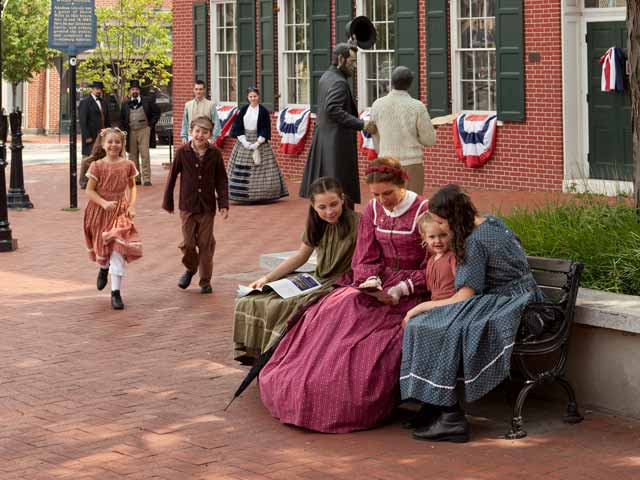 In 1761, one of these early settlers, Samuel Gettys, established a tavern in the area. Just twenty-five years later, his son James had laid out a town of 210 lots with a central town square on the land surrounding the tavern. The town today is Gettysburg. At this time, Gettysburg was part of York County. But by 1790, the growing population of the area decided to separate from York County.

A new county was approved by the state legislature in 1800 and was named after the President at the time, John Adams. Gettysburg was chosen as the county seat.

By 1860, the town of Gettysburg had grown to 2,400 citizens. Ten roads lead into the town, creating a few small but thriving industries. Approximately 450 buildings housed carriage manufacturing, shoemakers, and tanneries as well as the usual merchants, banks and taverns. There were also several educational institutions. These roads and industries would lead two armies into the county in 1863.

By the summer of 1863, the Confederate Army, led by General Robert E. Lee, had achieved many victories, and was ready to invade the North, moving both armies from the war torn Northern Virginia. By invading the north, and by chance securing a victory, it could cause disenchanted northerners to pressure the Lincoln Administration to seek a settlement toward peace, thus ending the war. This decision would lead the two armies to the small, rural town of South Central Pennsylvania – Gettysburg. 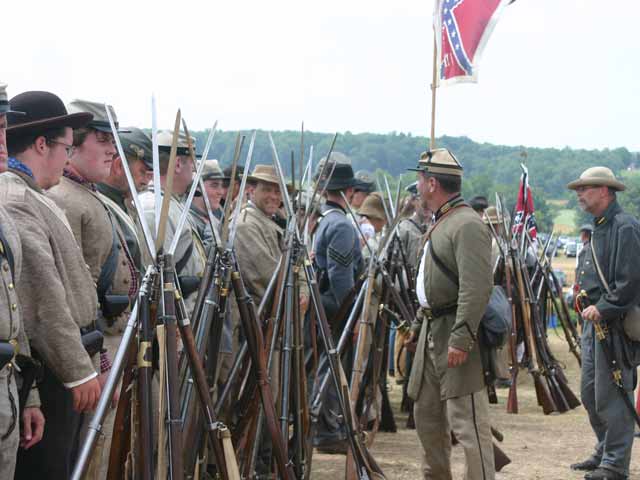 General Lee’s Army of Northern Virginia, with 75,000 men strong, was traveling north to central Pennsylvania. On June 30, Lee learned that the 95,000 men of the Union Army of the Potomac, led by Major General George G. Meade, were pursuing them. By July 1, both armies would converge on Gettysburg.

Lee ordered several brigades to travel east to scout location and forage for supplies for the southern troops. Northwest of Gettysburg, these brigades were met by their northern counterparts. A skirmish ensued and as the battle heated, word was sent back to both commanders that the enemy was found and reinforcements were needed. Over the next two days, Lee’s army would be drawn to Gettysburg from the west and north, while Meade’s would arrive from the south and southeast. Thus, a battle, not planned, would become by chance.

As southern forces continued a relentless attack against the entrenched Union troops, the additional arriving Confederate forces launched an all-out-offensive driving the Union forces through the streets of Gettysburg to a defensive line south of town on Cemetery Ridge. By the end of July 1, the 5-mile Confederate line traveled from Seminary Ridge on the west side of Gettysburg, through town and eastward toward the area called Culps Hill. As additional Northern reinforcement arrived on the field, they occupied a two-mile defensive position commonly referred to as a fishhook formation along Cemetery Ridge and Culps Hill. 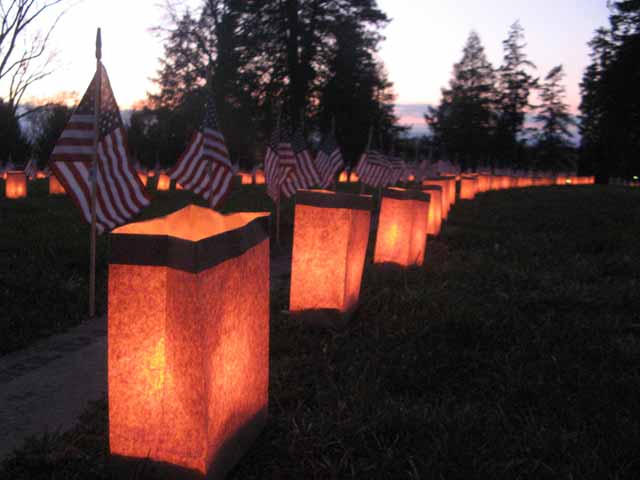 July 2, battle was initiated by a series of uncoordinated and fragmented Confederate attacks on the Union defensive position south of the town. While simultaneous attacks were supposed to have occurred on Culps Hill and Cemetery Ridge, the attacks took place six hours apart and were unsuccessful. Though Union forces held onto Culps Hill, the Confederate forces did drive back the Union in areas referred to as the Peach Orchard, Wheatfield, Valley of Death and Devils Den with a staggering amount of casualties. The Confederate advance of the right flank had initially succeeded but was stopped by heroic efforts of Union forces in an area known as Little Round Top.

Believing his army was invincible and undefeatable; General Lee decided his troops would attack what he thought to be the Union Line’s weakest position on the following day. At the same time, General Meade held council with his Corp Commanders and decided to remain in a defensive position for the battle anticipated the next day. Thus the decision made by both commanders would lead to one of the most famous days of the American Civil War.

Several months later, as the citizens of the small town moved through the aftermath of the three-day battle, David Wills, a prominent Gettysburg attorney, was appointed as the state agent to oversee the establishment and construction of the Soldiers’ National Cemetery, a final resting place for the Union dead at Gettysburg. David Wills was also responsible for the dedication ceremony, inviting President Lincoln to provide “a few appropriate remarks.” On November 18, 1863, President Lincoln arrived in Gettysburg. Staying with Wills, Lincoln is believed to have completed his final draft of the immortal Gettysburg Address in Gettysburg. On November 19, Mr. Edward Everett served as the main speaker of the dedication, with Lincoln delivering his very short, but lasting remarks.

Watch The Battle of Gettysburg video 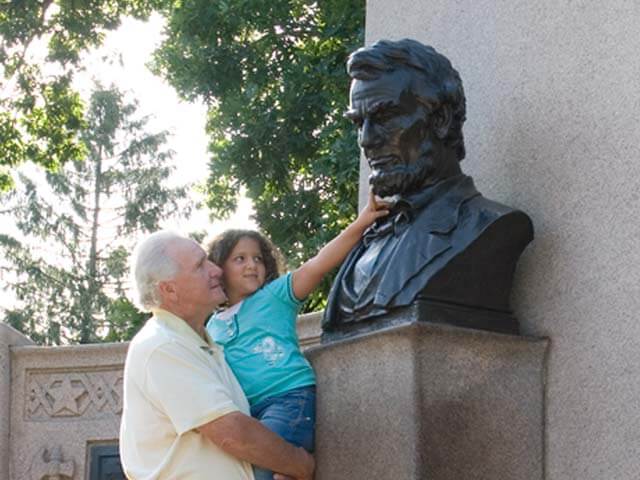 “Fourscore and seven years ago our father brought forth, upon this continent, a new nation, conceived in liberty, and dedicated to the proposition that all men are created equal.

Now we are engaged in a great civil war, testing whether that nation, or any nation, so conceived, and so dedicated, can long endure. We are met on a great battlefield of that war. We have come to dedicate a portion of it as a final resting place for those who died here, that this nation might live. It is altogether fitting and proper that we should do this.

But, in a larger sense, we cannot dedicate – we cannot consecrate – we cannot hallow this ground. The brave men, living and dead, who struggled here, have consecrated it far above our poor power to add or detract. The world will little note nor long remember what we say here, but it can never forget what they did here. It is for us, the living, rather, to be dedicated here to the unfinished work which they who fought here have thus far so nobly advanced. It is rather for us to be here dedicated to the great task remaining before us- that from these honored dead we take increased devotion to that cause for which they gave the last full measure of devotion; that we here highly resolve that these dead shall not have died in vain; that this nation, under God, shall have a new birth of freedom; and that government of the people, by the people, for the people, shall not perish from the earth.”