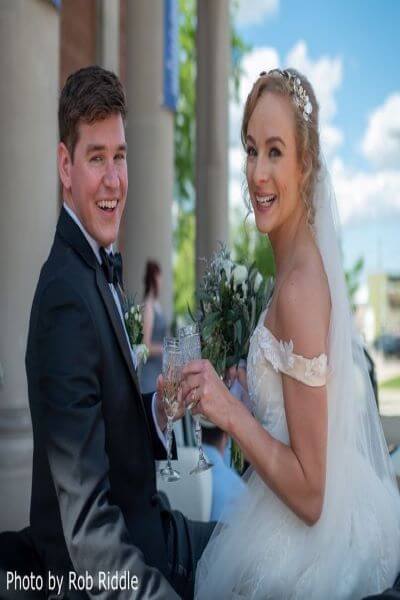 I Do, I Do! is a musical valentine and celebration of a marriage. Written by Harvey Schmidt and Tom Jones (The Fantasticks), the original Broadway production received seven Tony Award nominations. This touching story of two soulmates navigating the perils of life is set to a tuneful, charming score, including “My Cup Runneth Over.” The story spans 50 years as it focuses on the ups and downs experienced by Agnes and Michael throughout their marriage.

ABOUT THE CAST
Charlie Ingram (Michael) is a graduate of the Conservatory of Theatre arts at Webster University where he received his BFA in Musical Theatre and a recent graduate of the Depaul University College of Law. Before pursuing law school, he performed at multiple regional theatres around the United States including The MUNY, Stages St Louis, Arrow Rock Lyceum Theatre, and Insight Theatre Company. He also performed in the world premiere “Duck Commander” Musical in Las Vegas as well as eight months as an entertainer aboard the Oceania Regatta Cruise Line. He is a proud member of Actors Equity Association.
Erica Stephan (Agnes) is an actor in and around the Chicagoland area. Chicago credits include, Emma, Madagascar, and The Little Mermaid at Chicago Shakespeare Theatre. Beauty and the Beast, South Pacific, Saturday Night Fever, Crazy for You, and White Christmas at Drury Lane Theatre. Wonderful Town at the Goodman Theatre. Nice Work If You Can Get It, White Christmas at Theatre at the Center. Les Miserables and Tommy at the Paramount Theatre. Other regional credits include The Drowsy Chaperone and Living on Love at Peninsula Players Theatre, Mary Poppins and The Little Mermaid with Variety Children’s Theatre in St. Louis, as well as four summers at Timber Lake Playhouse in Mt. Carroll, IL. She is a proud graduate of The Conservatory of Theatre Arts at Webster University, a member of Actors Equity Association, and represented by Stewart Talent Chicago.