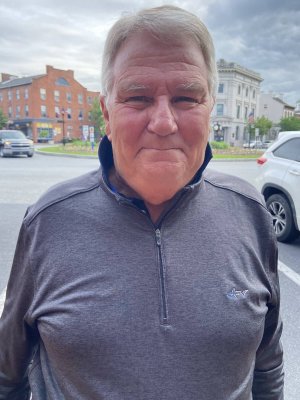 Ben Jones says he is in the ‘make people happy business.’

The Gettysburg music man’s smile stretches from ear to ear every time live brass music plays in the historic borough. Often, players are there because of Jones. The retired teacher turned festival guru is the founding director of the Gettysburg Brass Band Festival in June and Tuba Carol Fest in December.

Jones, a Chambersburg native, began his teaching career in 1967 at the Upper Adams School District. Seven years later, he moved to the Gettysburg Area School District where he spent the next 28 years working at every school in the district.

“Every time something happened in Gettysburg, they invited the high school band,” Jones said. “I used to tell the kids they were the most photographed high school band in the country.”

Jones recalled conducting the band in a Remembrance Day Parade while wearing a Union soldier’s uniform.  “Every time we would march by people, they would throw a salute,” Jones recalled.

He was baffled as to why until a friend pointed out the stripes on his shoulder. “I was wearing a general’s uniform,” he said.

Another parade watcher pointed out his belt buckle was upside down. “I didn’t have a clue,” he said.

Jones retired from teaching in 2003 but the beat carried on. In the late 1990s, he and others founded the Gettysburg Brass Band Festival.

“It was so exciting,” Ben said of the first year.

The festival evolved over the years with this year’s event featuring 15 bands over five days, June 8 – 12. The festival entertained locals and visitors but also served as inspiration for Jones’ high school musicians. “I think it was great for them to see people still played after high school,” Jones said.

Some of Jones’ students perform in the Adams County Community Band or join him on historic Lincoln Square on the second Friday in December for Gettysburg’s Annual Holiday Tuba Fest.

The first Tuba Fest 25 years ago featured eight players. More than 80 now regularly show up for the one-night gig, which helps usher in the Gettysburg Christmas season. Hundreds gather on the northeast quadrant of the square, listen to classic holiday songs, and sing along. The experience is about as close as one can get to being transported into a Norman Rockwell painting.

It’s a special night for Jones, especially when he looks around and sees former students who have moved onto various careers put a mouthpiece to their lips once again.

“We are not in the school business to produce professional musicians. We just hope people will enjoy music after high school,” he said.

A former Susquehanna University classmate from more than 50 years ago is one of the tuba players under Jones’ direction at Tuba Fest. Wayne Hill, former owner of Gettysburg Construction Company, remained an active musician while working as a professional businessman.

“That is really special,” Jones said of his relationship with Hill.

Hill is marking a decade of service on the Gettysburg Brass Band Festival board of directors because he enjoys the cause and appreciates the leadership.

“I call him the quarterback and we are a bunch of running backs,” Hill said of Jones. Jones is quick to decrescendo the attention from himself but Hill says the Brass Band Festival is his friend’s accomplishment.

“He took it from square one financially,” Hill said. Jones, ever modest, believes the credit goes to the citizens of Gettysburg who support the music.

“Gettysburg is a great town for music and arts,” he said.

The Gettysburg Brass Band Festival is June 8 – 12 at various locations. Visit www.gettysburgbrassbandfestival.com for more information and a complete schedule.